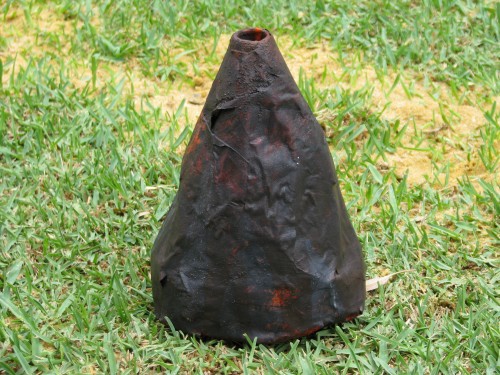 Watching a homemade volcano erupt is a very exciting experience for young children as they watch and learn about the amazing power of these geological formations.

Making your own homemade volcano is really simple and requires basic material that you can find around the home.

Recently after reading a non-fiction book about volcanoes and earth quakes, it aroused an interest particularly about volcanoes with Miss 4 and 5.  There was a number of questions and some misconceptions so we went on to explore these questions and then onto making our own homemade volcano.

You will need an empty plastic bottle (this is 1 litre bottle), newspaper torn up in strips, PVA craft glue, masking tape and a container for the water and glue mixture.

To make the lava to mimic that of a real volcano you will need bicarbonate soda, red and yellow food colouring (or orange) and white vinegar.

Time to get messy: applying Paper Mache to our volcano using small strips of newspaper dipped into a gluey water mixture.  We also folded a small amount of newspaper into the opening of the bottle but making sure there was enough room to add our bicarbonate soda and vinegar later.

Tip – keep some old flannels or cloths handy for the kids to wipe their hands on.

When the Paper Mache was dry, Miss 4 and 5 set to work to paint the volcano.  We had watched a few videos on You Tube about volcanos and it was decided that the volcano needed to be black, dark grey and a little bit of brown.    While we were waiting for the paint to dry we had a practise run to see how much bicarbonate soda and vinegar would be needed for the homemade volcano.   To give you a bit of an idea, we used 4 tablespoons of bicarbonate soda and 1 cup of vinegar mixed with some red and yellow food dye and this seemed to work fine.

Sifting the bicarbonate soda into the funnel and about to pour in the vinegar…..you have to be super quick to get the funnel out.  Miss 5 was standing by ready to grab it after Miss 4 poured in the vinegar.

Our homemade volcano fizzing and frothing as the bicarbonate soda and vinegar react together.

Making a homemade volcano is a fun and simple process that kids will take on a sense of pride, ownership and achievement of what they have accomplished.  All this while learning new things and practising some basic skills with an almighty eruption at the end.  We repeated the eruption 3 times!

Some simple facts about volcanoes:

As a result of this activity, my kids were very intrigued about how bicarbonate soda and vinegar react together –  Here is an activity to extend this learning through making Homemade Honeycomb.  Click on the image to see the full post!

Some great books about Volcanoes for Kids

Look Inside Volcano by DK

The Best Book of Volcanoes by Dr Simon Adams

My Mouth is a Volcanoe by Julia Cook

34 thoughts on “How to Make a Homemade Volcano?”